Furcadia, also known as Furc, is a furry graphical multiplayer online community (MMOSG) developed by Felorin (Dr. Cat) and Talzhemir ("'Manda"), with contributions from many others.[1] Furcadia has been running since 1996[2] and is possibly the largest online furry community, with over 70,000 registered characters[3] and 2,000 - 4,500 online users active at any given time.

Furcadia is free to all users. To join Furcadia, the Furcadia Client can be downloaded and installed. This client connects to the Furcadia server, allows for character creation, and provides a graphical environment where a furre (Furcadia character) can explore dreams (player-made areas) and interact with others.

Joining Furcadia involves creating a character by selecting a name, entering a contact e-mail address to activate an account, selecting a species, choosing colors, and writing a personal description that is visible to other furres.

The following species can be selected during the character creation process: Rodent, Equine, Feline, Canine, Musteline, Lapine, Squirrel, Bovine (also known as Minotaurs), Ursine, and Bugge. It is also common to use one of these base species to create another; for example, choosing the coloring on a squirrel to make it look like a skunk.

In addition to the basic species, furres can purchase optional add-ons for their character using real-world money. These add-ons are known as "Digos". These include Portrait spaces (for one port each), wings (Classic Wings, Tricolor Wings, Butterfly Wings, Bat Wings, and Prime Wings), mythicals, including the (Dragon, Phoenix, Gryphon, Kitterwing, Unicorn, Kirin, and "ferian" (non-biped) species). Some of these avatars include abilities, such as flight and fire-breathing effects for example. Furcadia also offers Furlings (child furres), Nobles (regal male and female versions of the 'default' species) and Seasonal avatars (only available during certain times of year). All purchases help support the operation costs and development of Furcadia.

Real-world money can also be translated in to game currency, known as "DragonScales".[4] DragonScales are only usable for spending at the Digo Market and are often used for game-related trades. They come in three types:

An advantage of the Dragonscales system (as well as one of the reasons for it's creation) is that the in-game staff and volunteers are able to safeguard trades against scams or thefts, without having to resort to lodging disputes with the players bank or money-trading service(s), such as Paypal. 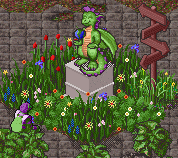 A statue of Beekin in Naia Green

There are twelve official maps within Furcadia:

Many different role-playing communities exist within Furcadia. As furres can create their own dreams, continuities range from Pirates on the High Seas, to Furres in Spaceships, to Elizabethan Gardens, to Medieval to Fantasy. One famous outside the Furcadia community is Lost Lake, featured in the webcomic Dan and Mab's Furry Adventures

The official continuity of Furcadia is known as Furre! and was created by Talzhemir and set in the world of Kasuria. It has a rich history and mythology.

Furcadia comes with tools allowing a furre to create their own worlds ("Dreams".) This includes DreamEd for laying out objects, floors and walls, DSEditor for writing DragonSpeak scripts to add interactivity, with two modes, Classic and DragonSpeak Constructor, and FoxEditor to draw new objects, floors, walls and portraits. There is also skinner which allows you to edit the Furcadia skin files as well as PCX editor, which define the look and feel of the client user interface, and the Kitterspeak Editor, part of the foxEditor which allows you to edit animations on objects.

Patches on Furcadia are free to make "mods" or "add ons" to the base content included with it. This can be new player portraits (either by specific species or entire replacement packs), custom avatar sprites (to enable play as feral wolves for example), new tiles to create original-looking Dreams, snippets of DragonSpeak to aid Furcadia programmers, or even redesigns of the games UI.

Furcadia has a large and active volunteer community, known as the Furcadia Beekins. There are many types of Beekins:

These servers were running on a shared 1GB backplane with 3TB of monthly transfer.

WikiFur News has a related story:
Kitterwing update for Furcadia