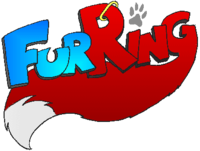 FurRing is both the internet's and fandom's oldest and most active webring(hosting more then 200 sites at it's height - almost all of which are no defunct)[citation needed]. The ring was started in 1996 by Mark Freid and lasted until 1999, after which Yahoo purchased WebRing.org to integrate it into their system, failed, and abandoned it[citation needed]. Mark's site went offline in 2001 when he left the fandom[1]. The site was passed on to Captain Packrat who attempted to keep the ring going from 1999-2002, but now serves as an archive of it's former self. Feeling nostalgic, Logansryche took it apon himself in 2019 to revive the ring to a fully functional underground webring for the fandom[2][3][4][5].

Mark's website for FurRing consisted of black background with teal writing, listing the rules and proceedures for joining. The ring itself relied heavily on WebRing.org's code and used a ID system to determine who was who. This lasted until 1999 when Mark closed the site and left the fandom.

Capt PackRat's version of the site was an exact mirror of Mark's site, with the change of copyright. This version also relied heavily on WebRing.org's ID system to determine who was who. This lasted until 2002 when the site no longer was updated, but is still online[6].

Logan's version of the site uses internal scripting to the furnationreborn.com site to create a self-contained webring enviroment that's easy to use.

The goal of reincarnating FurRing was to have a place underground just for furs. Webrings were super popular then because search engines made it just as difficult then as it does now to index websites. The future is always uncertain however FurRing has become a pet project for Logan, so it'll become relevant in the fandom again for as long as he wishes it to.