FurNation Prime, formerly known as simply FurNation (after its original namesake, FurNation), is a sim in Second Life's FurNation Worlds region. Its primary feature, Luxor, was the earliest sim built in the FurNation Worlds area, being built in Summer 2005.

FurNation Prime is, as the name implies, the "main" or "primary" sim. Its official theme is "Egypt in the 21st Century". Several features of the design (most notably the teleports) are lifted from Stargate.

To the far southeast is the somewhat luridly-decorated Club Fur (owned by Cobalt Neutra), and just west of that are the Roman Baths (also known as the Bath House which was moved to FurNation Reia and is managed by Corsi Mousehold), which is pithily - but fairly accurately - described as a "fucking furries zone". Now in the place of the Roman Bathhouse in Prime is a parcel dedicated to the Ark (owned by Shadowquine Maltz). 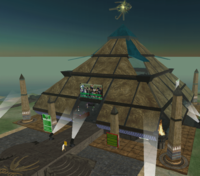 The Luxor was founded on 3 June 2005, built by Selkit Diller with later modifications by Nexxus, and basement work was done by Wolf Rocco.

As of September 2006, Axeonos Fluffball took over the Luxor as Manager. She has managed to organize several signs, billboards, and vendors used to benefit FurNation to be placed there. She has two lucky chairs there as well.

The Luxor remains in the top 5 most visited places in FurNation Worlds, as it is typically the first thing new visitors see when they come to these sims.

Prime originally came online in April of 2005 as just FurNation.

The owner of the region, Nexxus, announced the closure of both the FurNation website and FurNation Prime in late spring 2009, after a protracted financial crisis for the parent company, FurNation Multimedia.