FurNation Phoenix is a private sim, part of FurNation Worlds on Second Life. The sim mainly consists of private residences and public parks.

There is no official theme but most of the residents in Phoenix have adopted a rural / wilderness style of building at ground level. 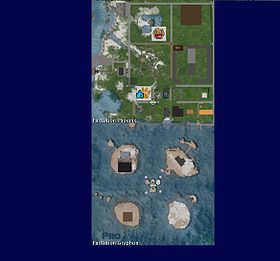 The FurNation Pony Club is a group in Second Life for people that share common interest in equine based avatars. Despite its name, everyone is welcomed and membership is not limited to equines. Events and dances are frequently held at the giant barn with live DJs. Those looking for a home on Second Life can find low cost stall rentals with customizable sound streams; an uncommon perk for rentals of that size.

Built by Ante Flan, Phoenix Beach was the old home of Ante's store showcasing his many landscaping products available on Second Life. When the main store was moved to a different simulator the site was converted into Phoenix Beach. The beach features a lighthouse, pier, and a tiki bar for all your beach going needs. The site is open to the public.

The site was originally a private residence with landscape done by Ante Flan and Kabangeh Fitzroy. Eventually Kithrak Kirkorian decided to turn the place into Phoenix Park to preserve the landscape. Phoenix Park has a fireplace and swing for people to gather around and chat as a small stream flows towards the beach nearby.

These administrators address emergency issues. Otherwise they do not get involved with local sim administration.