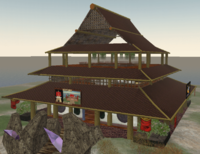 FurNation Alpha is an island in the FurNation Worlds sim of Second Life. It originally contained the Art Gallery (displaying mature art of variable quality, including some well-known artists such as Wookiee and FoxxFire) and the FurNation Worlds Skymall. It also held some land plots available for rent.

FurNation Alpha was sold in the first half of January 2007 to Equino Faulkland (who also owned FurNation Asylum). Plans are being made by Equino and his staff to reconfigure the rental parcel layout and prim use in the sim. Plans for the Art Gallery and SkyMall are being made. As of February '07, the Art Gallery has been removed with no known future plans for it.

Alpha originally came online in June of 2005 when FurNation (now FurNation Prime) outgrew itself as the community's popularity boomed among Second Life furries.

As of April 2007, FurNation Alpha had been bought out by Corsi Mousehold and was currently undergoing renovations pending the move of the Skymall. Plans for the sim were still only rumors at that point, including the possibility of a medieval theme.

On May 21 2013 the Furnation Alpha Sims was sold, as Corsi Mousehold was unable to continue paying the region fees out of his own pocket.

The FurNation Worlds Skymall (as of May 2008 renamed the Drakeal Mall) is one building with 5 floors for rental vendor space, which once resided in FurNation Alpha at <128,128,505>. Slots are available on the 1st floor for L$100/week with 60 prims. The 2nd floor goes for L$60/per week with 40 prims. Anything above the 3rd floor is L$50/per week with 30 prims. Rent from the SkyMall has been a significant source of income for FurNation.

The Skymall originally resided in the basement of the Luxor, but soon outgrew that structure, as well as causing significant lag issues for those just visiting the Luxor (the lag issues are still there, but they only affect those who intend to visit the Skymall). It can be most easily accessed by using a teleportation pad, or any high-altitude flying vehicle.

The Skymall was placed on its own sim (owned by Ethen Pow), and renamed the FurNation Worlds Mall, primarily to keep lag low. As of May 2008, this sim has been reclaimed by its owner and renamed the Drakeal Mall.

Known SkyMall staff have been as follows: