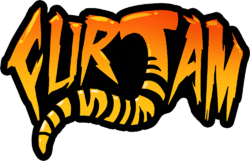 FurJAM is a large furry gathering held yearly in Sydney, New South Wales, Australia. It typically occurs during one of the weekends of the September School Holidays (NSW), or as late as the first week of October.

FurJAM is a very laid-back outdoor, socially interactive event based around city sightseeing, a picnic in a park with a BBQ, social networking, and having a great day (or three). The ideals of FurJAM are that it should not be restricted to a single location or venue, but be a roving occurrence, allowing people the freedom to pick and choose events they would like to attend and to come and go as they wish. While the main event is all-ages, many evening events are 18+, or at least require adult accompaniment, due to the prohibitive costs of running a convention in the Sydney area, FurJam is to stay in its original meetup format for the foreseeable future to come.

Over the years some of the members of the community have asked for it to be turned into a convention, but due to the prohibitive costs of running a convention in the Sydney area, FurJam stayed its original meetup format until the establishment of spinoff event Aurawra by FurJAM staff and other local organizers, the first instance of which is to be held in July 2020 in addition to FurJAM.

After Flaydramon and Anakaine decided they did not have the time to plan FurJAM 07, it was postponed. After complaints from various furs about it being abandoned, AussieHusky took over the FurJAM Website and planning for the 2007 event.

The t-shirt design for FurJam 2008, depicting AussieHusky's idea "the Skyline of Sydney harbour (Things like the Opera House and Sydney Harbour Bridge) with a Macro Fox, Husky, And Lion (all male) stomping around with the stylized lettering of "FurJam" was done by DietyOfDooky.[3]

In June 2008 AussieHusky described FurJam as "an annual furmeet in Sydney Australia with between 30 and 70 attendees".[3]

Website functionality was restored on June 17th, but with the loss of all registration details[4]. Nevertheless, FurJam 2009 resumed its normal dates.

The format of the Furjam as remained similar to those of previous years; with the Friday night pub event at The Occidental, Saturday BBQ and Club event and the Sunday laser tag/bowling meet in the morning and closing ceremony pub meet on Sunday night. The Saturday park event was moved from Centennial Park, in the eastern suburb of Randwick, to Sydney park near the heart of the city center in St. peters.

This was done in order to make the travel between the park event and evening club event which was now held at Marrickville Bowls club easier due to them being one train station away, but unfortunately, Sydney Trains trackwork had not been announced at the time the bowls club was booked and thus it created minor problems for transportation wise. The Sunday daytime events coincided with the Bronies of NSW "Equestria Girls" screening and was presented as an alternative to those who didn't wish to attend the laser tag/bowling, while the Sunday night pub was at the Pyrmont Bridge hotel.

In response to calls from some segments fandom for FurJAM to transition from a meet to a convention, Kat Aclysm has issued a statement detailing that due to the cost of convention spaces in Sydney and that the desire for the con to be held in or near the CBD, that it is currently not financially viable to keep FurJAM affordable while also becoming a con.[8] [9]

On August 9, 2001, links to the FurJAM website were placed on 4chan's /b/ image board, with the intention of flooding the forums and messing with the poll choices for event activities. Following this, the polls and forum were closed, leaving the site less interactive.[20]

The 2009 FurJam suffered from disruption when an anonymous individual claiming to be AussieHusky changed the booking dates for several events just a week before FurJAM was set to go ahead. However, the sabotage attempt was quickly thwarted, with all venues restoring the bookings within 24 hours.[clarify][citation needed] FurJAM 2009 went ahead without further incident, excepting a minor physical altercation on Friday night between attendees, and the attendance of Timon_b on both Friday and Saturday despite being officially prohibited from attending the meet.[citation needed]

Timon_b was refused entry to the Eastern Suburbs Legion Club on Saturday night by RayLiehm after being banned following an earlier incident.[clarify][citation needed]