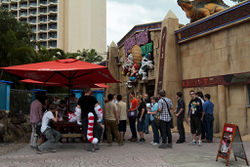 FurDU 2011 program still somewhat reflected the 2010 schedule, but with the inclusion of new events like a poker tournament, iron artist and furry game show now taking feature positions within the timetable. The Guitar Hero tournament was dropped from the schedule amidst concerns their was insufficient attendee interest and no gap within the program to include it.

During 2011, the convention still predominantly encouraged attendees to get out of the hotel and see the Gold Coast's attractions. The con book again included tourist information about locations and activities attendees could visit in the 'spare time' sections of the program.