Fungus Farm is a defunct webcomic written and drawn by Nixie and published on the Katbox. It followed the misadventures of two members of a space station skeleton crew, Chess and Dice, as they attempt to deal with the outbreak of a fungus. During its brief run, Fungus Farm was reader-interactive, with Chess and Dice taking suggestions from readers in the Katbox forums. Fungus Farm is set in the same universe as the original version of another Nixie comic, Anthronauts, which ended shortly after Fungus Farm was cancelled and was rebooted in July 2013. 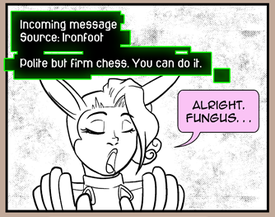 Siblings Chess and Dice are Keedon, an anthropomorphic equine race hailing from the planet Keedon. They are staff on an egg-shaped space station called the Space Agricultural Food Engineering (S.A.F.E.) Farm, and at the time of the comic's opening they are the only staff remaining there during holidays.

The first five comics set up the reader-interactive part. Dice comes to Chess and asks if he can use the women's bathroom because something is growing in the men's. The two of them go to the men's bathroom, where they find a fungal growth in a toilet. It dissolves their scrubbing brush and then attacks them when Dice pours bleach on it, at which point they flee.

Unsure about how to deal with the fungus, the two of them send out a distress message targeted at the comic's readers (who, in the context of the story, communicate with Chess and Dice through the radio)[1].

Starting with the sixth comic, Chess and Dice begin receiving suggestions from the readers, selected by Nixie. In addition to dealing with the fungus - which displays signs of intelligence, causing Chess and Dice to fight over whether or not they should destroy or protect it - they are contacted through hologram by Dr. Caroline Wimble, of whom they are both terrified. Dr. Wimble is on her way to the S.A.F.E farm and wants samples of the fungus. For the remainder of the comic's 12-page run, Chess and Dice unsuccessfully try to collect some.

Chess (left) and Dice argue over what to do with the fungus in page #4/5.

Dice, a male Keedon. Dice is upbeat and carefree, in contrast to his sister Chess' no-nonsense attitude. He believes that because the fungus shows signs of intelligence, it should be protected, and the men's room turned "into a nature preserve." This initial disagreement is the reason Chess sends out a distress signal, in hopes that it will be received by people with knowledge of the fungus. Neither his nor Chess' official roles on the station are ever completely outlined.

Chess, a female Keedon. Chess lacks Dice's sense of humor, and reluctantly agrees to some of the submitted suggestions. In a site poll of readers, Chess lost a "Who do you think is LESS sexy?" vote against Dice and had to attempt to seduce the fungus. Chess has much less patience than Dice with the message suggestions, sometimes cursing out or interrupting transmissions she doesn't like.

Dr. Caroline Wimble, a female Pelzarian. A "genetic modification specialist," according to comic #6, Dr. Caroline Wimble absolutely terrifies Chess and Dice, even though their species is many times larger than hers. Exactly why they fear her is never explained, although it's implied in comic #7 that she murdered a coworker for failing to complete a task. In Anthronauts, where she originated, Caroline is shown to have an unflinching enthusiasm for gory amputations.

Caroline Wimble previously appeared in the original version of Anthronauts in a flashback of Dr. Boris Wimble. In it, he describes cloning Caroline and raising her as his daughter, and then accidentally killing her eleven years ago[2]. This places the events of Fungus Farm at least that far prior to the events of pre-reboot Anthronauts.

In the rebooted version of Anthronauts, Caroline's backstory is still the same, but she is still alive. The reboot was started only after Fungus Farm was cancelled, and the two do not share a continuity.