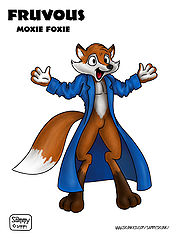 Fruvous the Moxy Foxy is a furry from British Columbia. These days, he can mostly be found on FurNet, in the #vfur and #softpaws channels. He still shows up on Tapestries now and then, but mostly, he haunts and pounces and wags on the FurNet.

Fruvous runs several Yahoo! Groups mailing lists. He founded vfur Yahoo! group for furries in the Vancouver, British Columbia, Canada area. He also founded the Vancouver Freecycle Yahoo! group to connect people who have usable unwanted items with people who want said items, but in 2009 the group was replaced with freecycle.org.

He also runs his Cafe Press store, where he sells funny T-shirts, mugs, and other stuff. He ran his Phunni.com website, a digg.com-style comedy site full of links to all kind of funny videos, weird news stories, humorous images, and other funny stuff.

Fruvous the Moxy Foxy is an anthropomorphic red fox from the planet Vulpes Majora. He is four feet tall (a bit above average for his race), very fluffy and soft all over, and prone to wagging. He's also an escape lunatic, having staged a daring and wild escape from the intergalactic insane asylum where he was being held as a political prisoner. During his lifetime, Fruvous has been, among other things, a petty thief, a pickpocket, a spy, a cat burglar (fox burglar?), a nanny, a trader, an information broker, a madame of a very prosperous brothel, a pirate leader, a tribal "princess", a political activist, an intergalactic folk hero, and a short order cook.

Personality-wise, Fruvous is kind, friendly, affectionate, silly, gentle, understanding, and sensitive. He loves snuggles and cuddles and scritches and other forms of gentle physical affection, and is a confirmed cuddleslut and lapwarmer. :) He's bisexual but leans heavily towards males (and sometimes 'accidentally' ends up falling into their laps because of it), but loves to cuddle and scritch with darn near anybody. He's somewhat mammal-biased, but not totally. He likes bright, sweet, nice people who like to cuddle and chat.