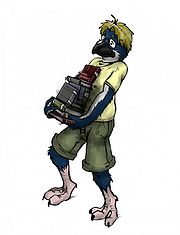 Fruitcake (known outside of fandom as Oscar or Hoskie) is an artist from Long Island, New York. He spent a year living in Toronto, Ontario, Canada and endeavors to move back in the future. His fursona is a fairy penguin.

Fruitcake became involved in the furry fandom in 2004, but he has drawn and enjoyed anthropomorphic animals since childhood. He has been collecting plushies for many years and considers himself to be "something of a plushophile."

He has been attending I-CON yearly since 2001 and is hoping to attend his first furry convention in the near future.

The majority of the "Fruitcake canon" takes place in the first three decades of the 2000s. All of the characters are tied together by their associations with a large, as-of-yet unnamed university.

Fruitcake (b. 1987) - a podgy and bespectacled fairy penguin. The character is heavily based on the artist's own looks and personality. Fruitcake is a voracious reader, a novice Classical scholar, and is happiest when having a pint of Guinness down at the local pub with Lemmy. He has a tremendous amount of Canadian pride, despite his lack of citizenship. Unlike the artist, who is a pacifist, Fruitcake is hot tempered and not afraid of getting into barroom brawls, which causes some to speculate that he has a Napoleon complex.

Lemmy (b. 1965) - Fruitcake's lion boyfriend. Lemmy is polylingual, has a sharp wit, and is an avid Chicago Bears fan. The character's looks and personality are based on the artist's actual boyfriend who is not a member of the fandom.

Fatty (b. 1979) - an obese canine, prone to wearing skimpy swimwear. Despite his tremendous size, he is very gentle and good natured. He enjoys caring for little critters, the music of the 1970s, and ice cream.

Daniel (b. 1996) - a blond-haired wolf with a serious overbite. Born in the southern United States, Daniel has gained a reputation for being a redneck. He became fed up with the behavior of his pack and moved away. He has been working to distance himself of some of the unsavory events in his past.

Alexandros (b. 1997) - a transgendered velociraptor who spends most of his time desperately trying to hide his birth sex from his frat brothers. He has a passion for music and has been studying the guitar since he was ten years old. He has scruffy black hair and often wears baseball caps.