From WikiFur, the furry encyclopedia.
(Redirected from Fruit bat)
Jump to: navigation, search 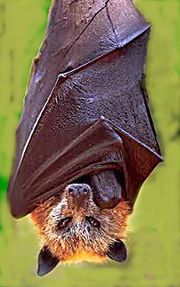 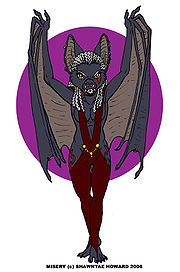 Bats are nocturnal flying mammals in the order Chiroptera; they are divided into two suborders: megabats and microbats. Bats are the only mammals that are capable of flight. Bats mainly eat insects, but some species such as the fruit bat, eat fruit.

Famous anthropomorphic bats in animation include Batty Koda, a rainforest-dwelling bat from the 1992 movie FernGully: The Last Rainforest; Bartok - a Russian albino bat from Anastasia; Stellaluna, a fruit bat from the book and film by the same name; and Batfink, an anthropomorphic parody of Batman.

Author Kenneth Oppel created a best-selling series of novels entitled Silverwing which features various species of American bat as central figures. The book has since been adapted into a television series.

Bats are also featured in video games, such as Rouge from Sonic the Hedgehog.

The bat is associated with characters of the night; both villains like Dracula and heroes like Batman. They are also associated with unusualness and eccentricity. Native Americans use the bat to symbolise intuition, rebirth, illusion and communication.