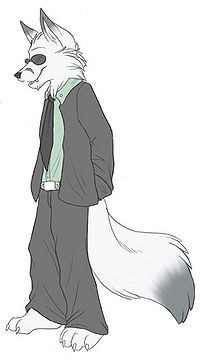 Frostscar (formerly Silverfang; born November 13th, 1985) is an arctic fox furry who lives in London, Ontario, Canada. Frost has lived in Ontario all his life; mostly in Mississauga, but briefly in Kitchener and Toronto before settling in London.

A beginner to fursuit construction and design, Frostscar, with the help of Stitchwolf, finished his first suit on January 20th, 2008.