Frostbite (Neige Unuulaq) is a character in Extinctioners. She was created by Rei Vegan and she made her debut in page 09 of the Extinctioners' webcomic, "Artic Blue" created by Shawntae Howard. 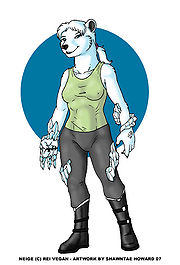 Neige grew up in Eastern Canidae, in small town Burge. The daughter of her very supportive and loving adoptive parents Melissa (a 62 year old siberian tigress) and Gerald Unulaaq (a 66 year old Badger). At the age of 19 she moved, in search of greater financial gain in the culinary industry.

It was at the age of 21 that she discovered her hybrid abilities; the power to control surrounding or localized temperature. For a hybrid this is slightly later in the game than most, which might also explain her inability to utilize them to their full potential. It's only in cases of extreme anxiety that Neige's abilities become fully apparent. Unfortunately they're also uncontrollable in this state.

She works as a chef and pulls in her part of the expenses with a little left over for spending at the mall.

Although she may seem bubbly-headed at times, it's often misinterpreted from her caring personality. She'd rather not fight (pacifist), but has the state of mind that if she didn't, who would protect those who couldn't protect themselves?

She likes to shop; spending money would have to be her favorite pastime. She enjoys sports (particularly those in the winter; snowboarding most noticeably). She enjoys Mountain biking, hiking, and rollerblading, and spends her weekends at the local judo dojo as an assistant 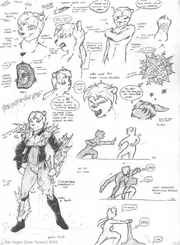 Adaptive Elemental Barrier: Ice, being made of water, and thus ten times more dense than cement, protects Neige from any and all foreign kinetic contact (welcome or unwelcome), displacing any attack across the surface of her body. Depending on her hydration at any given moment, the barrier can be as small as a hand, or large enough to cover nearly half of her body. The elemental barrier is an autonomic reaction, though she has learned to control it enough to hide it beneath her clothing when needed, and fashion rudimentary offensive shapes as weapons.

Self Defense (Aikido 6th dan (rokudan)/Judo 10th degree (judan): Having had studied judo from the age of 6, overlapping it later with Aikido, Neige was the prize pupil of Canidean immigrant and defensive martial arts master Feng Sen Wan.

When emotionally distressed or anxious, Neige's latent abilities have a tendency to surface unpredictably. Most noticeably, temperature drops in areas as small as the interior of a car to as large as a football stadium can range between two degrees celcius and twenty degrees celcius.

Because Neige didn't come into her powers until a little more than a year ago, she's had little time to perfect their use and as a result often finds herself at their whim, which tends to create awkward situations.

and of course... sweets (though it can't be helped, she is a cook).