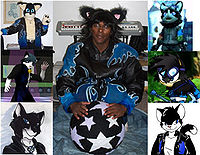 Frost Cat or Frostcat (born 1982) is a male furry fan who lives in Bassett, Wisconsin, USA, with his fire-tiger mate Blazger. His cool look and personality is mostly based off of Fisk Black created by Jay Naylor. He made a huge yarn ball that took a little over a year to modify since Midwest FurFest 2004.

Frost is a member of the Lake Area Furry Friends (LAFF) group, contributing to such events such as the LAFF New Year's Eve party, cohosting it in 2007.

Frostcat originally started attending anime conventions for his love of catgirls. Later, he created a cat group known as The Neko Community. Learning of the furry fandom in late 2003, he became more interested in feline characters more then ever. There is still a little cat-boy left from his random "-nyo" while speaking or while typing at the end of some sentences. The nyo is an onomatopoeia for the sound a young kitten makes.

Being a household cat will get the better of him at times. He is more than likely to become distracted by chasing lights, the scent or mention of fish, and shiny as well as loose objects. He is fairly competitive when it comes to video games and also have closer interest when feline characters are involved. Although he rarely displays it, he can become very creative. His recent ideas are different styles of creating yarn balls and drawing various objects based off of certain video games in plans upon creating them.

His first furry convention was MFF 2004 as he won a fairly mid-sized yarnball. To remember his first experience, he has added new color yarn each month until MFF 2005. It was there when he debut his finished black yarnball with blue and white stars and blue flame outfit. He has also attended Anthrocon 2006 and was recognized in a news article in Pittsburgh. His most recent convention was at Anthrocon 2009

Frost's trademark is his many giant yarnballs, each with various themes.