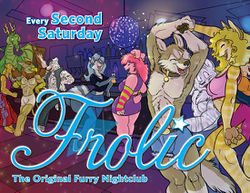 Generic flyer with info for Frolic

Occurring every first Saturday of the month in San Francisco. Since its opening on March 13th, 2010, the event has inspired similar furry events all over the United States[citation needed]. Frolic also host the annual events Frolic San Jose and Furries in the Wild as well as one night only events Frolic's Menagerie and Frolic at Bootie.

The Eagle is located at 398 12th Street (at Harrison) in San Francisco. It is a 21 and over nightclub. The venue also has a small backstage area that is used occasional as a staging area for live shows. This area is converted into a fursuit lounge/staging area for Frolic.

Most of the lighting is provided by the producers of Frolic, and set up that night for the event, as well as additional decor that help add to the furry vibe.

Frolic features regular DJ NeonBunny, as well as rotating local furry dj's who are active in the fandom and special guest professional djs from the SF club/event scene. DJs use a variety of equipment, CDJs, laptops & controllers. The main styles played tend to be house, pop, breaks, trance, with the occasional dubstep and goth/industrial.

Frolic's regular VJs are Skibit and Maliepono. Using high end computers to push out HD furry content that is sound and midi controlled. Programs used include Arkaos Grand VJ, Module 8, Vdmx, Madrix and Flash. Videos are used from furry video artist all over the world including some commissioned works. Also features a two 140 pixel mapped fur panels for your visual cuddling pleasure.

Frolic live streams the DJ's and VJ's during the event at frolicparty.com. Frolic has partnered with the furry live stream provider furstre.am to stream the event.

- On January 14th 2012, Frolic fell on the same date as the local furry convention Further Confusion. To avoid competing with the event a one time special edition of Frolic was held at a local LGBT night club Brix in San Jose. Less then a block away from the San Jose Convention Center. - Due to popular demand Frolic returned to San Jose on January 19th 2013. To accommodate the growing attention of Frolic, the venue Agenda Lounge was used. Offering two floors of dance music, lighting and over 10 flat screens of furry themed visuals. - Frolic returned to San Jose at the Agenda Lounge to coincide with Further Confusion in January of 2014. - January 17, 2015 Frolic returned once again to San Jose at a newly opened and remodeled location The Continental, 349 South First Street. Formally

Furries in the Wild - Annual

Frolic at Bootie - One Night

Bootie is one of the biggest nightclub theme nights in San Francisco, happening every Saturday night at the DNA Lounge, with the theme of pirated music and mashups. On occasion, Bootie teams up with other event production crews and hands over a room for them to provide content. On Saturday, October 19th, Frolic hosted the upstairs loft room and had Frolic DJs and VJs providing content, and used the Bootie green room for fursuiters.

Saturday, April 4th 2015 by Frolic and the SF K9 Unit. A one night event for you to wear your most outrageous, your most wild, your weirdest, most animalistic costumes and gear. In San Francisco at F8 1192 Folsom Street.

The Bold Italic (Blog) - Map Shows SF is a Hotbed of One Kinky-Creepy-Cute Subculture - March 09, 2015 - http://www.thebolditalic.com/articles/7028-map-shows-sf-is-a-hotbed-of-one-kinky-creepy-cute-subculture