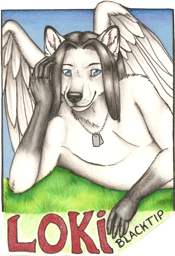 Loki Blacktip is a Therian. He normally takes the form of an Arctic Wolf, but he also takes a phoenix form for because of a multitude of reasons. Loki is very like his namesake, and mischief is his middle name.

Loki Blacktip when in his Arctic Wolf form has white angelic wings. He can also take both quad and anthro form. He has almost all pure white fur, with black markings around his ears, and on the tip of his tail. He also has black paw socks, a black nose, and pink paw pads. His black hair is long, flowing and silky-feeling; it lays down along his shoulder, or sometimes in a ponytail.

Loki wears thin-wire sliver rimmed glasses that hide his cobalt eyes. He has normally wolfish ears, the only difference is that they are rimmed with earrings; rainbow on his left, and sliver on his right. His wardrobe normally consists of a sliver silk shirt, and black silk pants, hidden under a black leather bomber jacket, which also hide his dog-tags.

Loki is currently a member of Buffalo Furs and New England Furs; he can also be found in #newenglandfurs, #buffalofurs, #techfurs on FurNet. All of his commissioned art is published on Fur Affinity. He used to be active on Second Life as Freyr Lane.