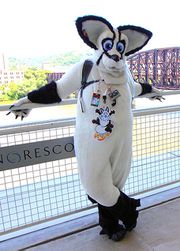 Freya has a young daughter and is engaged to lllKato, a New Castle native photographer. Her hobbies include arts and crafts, horseback riding, hiking, and video gaming. She is a student at Youngstown State University, seeking a Bachelor's Degree in Anthropology, with a minor in Cultural Studies.

Freya's fursona is a hybrid Arctic/fennec fox. Her coloring is mostly white, with black tips on her tail, ears, forearms, and legs. Her right eye is lavender and her left eye is turquoise in color. She is often depicted as being pregnant, as she has a love for the nature of being fertile, and pregnancy in general. She is mated to a white African lion, named lllKato.

Freya made her debut fursuit appearance at Anthrocon 2010 in a full suit that she created and designed herself.