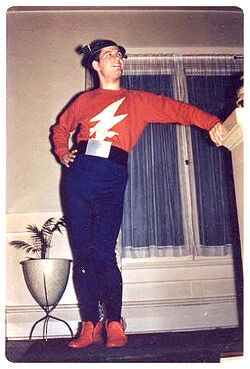 Fred Patten as the Golden Age Flash at the 1962 WorldCon

Patten was born in Los Angeles, California on December 11, 1940 to Shirley Marie (Jones) Patten and Beverly Walter Patten. He learned to read at a young age, starting with comic strips in both the Los Angeles Times and Examiner, and later was introduced to Walt Disney's Comics and Stories around 1945. Much of his early reading also came from magazines and books, and he showed an interest in Superhero comic books as well.

Science fiction became a key interest around age nine, and Patten began to collect books from Ace Books, Ballantine Books, and other publishers around that time, as well as major science fiction magazines including Astounding, F&SF, and Galaxy Science Fiction.

In the late 1950s, he became involved in the science-fiction fandom. He entered the University of California at Los Angeles in 1958, and its graduate School of Library Science in 1962. He became active in fandom after discovering the Los Angeles Science Fantasy Society in 1960. By the time he graduated with a Master's degree in Library Science in 1963, he had been writing for science fiction fanzines and publishing his own stories for three years. His Master's thesis was on the books of Andre Norton.

Fred was a CAPSer, a member of CAPS or Comic Art Professional Society, an association of comics professionals.[4]

Fred's activities in the fandoms were curtailed by a stroke he suffered in March 2005. Although still under medical care at a convalescent hospital, he continued making regular contributions to CAPS, Flayrah and other fandom or comic review/news sites. He donated hundreds of boxes containing his library of furry books and fanzines to the University of California, Riverside library,[citation needed] and visited to help organize them.[5]

Fred had been a long-time member of the Los Angeles Science Fantasy Society (whose clubhouse has often been used for collating issues of Rowrbrazzle), and was a founding member of the Cartoon/Fantasy Organization; the founders of ConFurence were also members of C/FO.

Fred was considered one of the founders of anime fandom in the United States, and one of the country's leading experts on anime and manga.[3][6] He was an employee for Streamline Pictures, a dubbing company for Japanese anime titles, from January 1991 until it went out of business in 2002[7].

Fred was the official editor of the Rowrbrazzle APA from 1989 to 2005, having joined the APA in 1984. He has also been active in Furthest North Crew and North American Fur, amongst other places.

Fred was the Fandom Guest of Honor (in absentia) for RainFurrest 2013.[9]