Frazzle is a furry cartoon artist and animator who has been publishing his art in the Furry Fandom since the mid 90ies. Frazzle runs a small production label called WetVixen Productions, located in Germany. His work can often be found as print portfolios, pin-up calendars or merchandise like mouse pads, coffee mugs and college bags, sold on various conventions, like for example the EuroFurence. 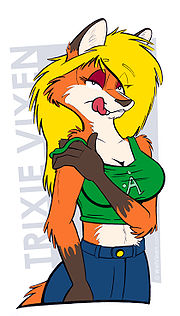 Trixie Vixen, as to be found in the current WetVixen pin-up calendar

His most known characters are "Trixie Vixen" (an anthro vixen, often appearing as pin-up motif) and the namegiving "Frazzle" (a cartoon-style rat with a cliché manic lust for popping balloons).

Frazzle can be found on various sites, including VCL and FurAffinity. Also, he attends various conventions regularily. 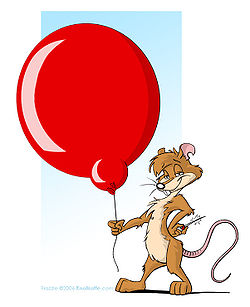 Frazzle is a cartoon-style rat who features a strong cliché about a manic lust for popping balloons. Most of the times, you can catch him sneaking up to a bunch of balloons with a pin hidden behind his back. Or seconds later being chased by the annoyed owner, enraged father of a now crying kid, or a common angry mob with torches and pitch forks.

“Frazzle the Rat” is following the classic cartoon characters found in traditional animation shorts, and most likely the cartoon art will be followed by several short animation films.