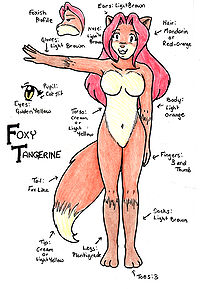 Reference sheet as drawn by the artist

Tangerine Willow is a Felox or a fox/cat hybrid, with her vixen mother's fur pattern and physical build, and her father's tabby color scheme. Her stomach and upper chest are creme, as well as the mask on her face; there is, however, no creme on her neck. Her body is a bright orange. Her socks, gloves and ears are a light brown or sienna. She has a fluffy tail with a creme tip. Her eyes are yellow with catslit pupils. Her hair is a deep Mandarin orange or reddish but never dark red or pink.

Depending on her mood and that of who she is pictured with, Tangie can have a humanoid face, a shortened muzzle, or a full length muzzle like a fox. Her body type is an average build at 5'2" with a size B+ bust with measurements of 35-28-35. Her legs are muscular but she has a gentle curve to her stomach.

Her hobbies include baking, drawing, knitting, hanging out with friends, and watching cartoons.

Living in central Pennsylvania for 21 years of her life, she decided to uproot herself in August of 2007 to see more of the United States, moving down to South Florida. In May of 2008 she moved again to North Florida and became a member of the Jacksonville Furs. After a while, she grew out of the group, but remained friends with a select few of their members. In December 2008, she got engaged to a dragon known as Grawal, that she met in North Florida.

She has attended multiple furry cons including AC 07 MFM 07 FWA 08 and AC 08, frquently in the Dealers Den.