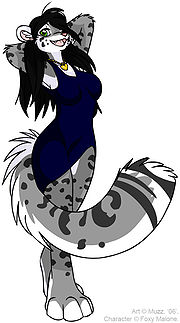 Born in 1966, this makes her one of the older furs in the Brisfurs group. She first discovered the furry fandom in the year 2000 via a furry webcomic which linked her to Furcadia, where she met MistyStriker.

Misty was also one of the first Brisbane Furs she met in real life, and from that meeting she slowly got to meet all the rest of the group including Bingo Dingo, Jaffa Ferel, Dimruthien VerenLaulaja, Nikita Wolfpaw and all the other people that make up the Brisbane furry community.

In December 2005 she met FlameDrake on IRC and they quickly became very good friends. In September 2006, along with Milesway, they rented a house to become the furry house, "The Cave."

Foxy Malone used to make her home in Furcadia. She ran a club in Furrabian Nights named The Pink Pussy, and in real life she lives as a member of the furry house, The Cave, with Milesway and Nikita Wolfpaw.

Since 2007 Foxy has been the lead administrator of Furstralia.

Her first fursona was Chrysalis, a purple and blue Appaloosa unicorn. She still exists, but lives solely on Furcadia. Foxy Malone, her current incarnation, made her first appearance two years later, and was originally an arctic fox, which she changed a few months later to her current snow leopard appearance.

Her fur is a very light grey almost white in winter, her tail is tipped in black and has a black ring a few inches from the end. She has shoulder length black hair and hazel eyes. Around her neck she wears a gold heart shaped locket and has two sets of earrings in her ears, one set of hoops and a set of studs, both in gold. In January 09 Foxy's appearance was changed slightly to include stripes on her lower arms and legs, this was to give her a more unique appearance

This form has a dragon soul, which will cause her fursona to morph in occasions, giving her snow leopard form feathered wings, which have a tendency to appear and disappear at whim, they are non-functional, and are not fully on this plane of existence. There have been other fursonas over the years but none lasting very long.

A descendant of Foxy resides in the Exodus universe, where she is one of the leaders of a group of rebel furs touring the universe in a cobbled together starship.