Foxy Flavored Cookie is a webcomic created by Thomas Evans (alternatively known as The Baker). The series centers around Pucho, a boy who was turned into an anthromorphic culpeo fox and lost his memory.

All strips are drawn using PaintTool SAI. Because of this, all strips that are drawn are of high quality, clear, and easy to read. The comic is hosted by Comic Fury. 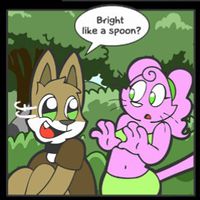 Foxy Flavored Cookie centers around a boy who is bitten by a pure lycan, causing him to become two-thirds lycan, and lose his memory. He is then found by a land scout, by the name Hos (pervy) and an insect biologist named Pituka. However, Pervy forgets to ask his name, so they name him after a box of cigarettes found in his pocket- Pucho. They take Pucho to an underground city named Paws Den, where he has to adapt to his new life.