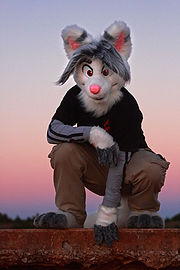 Foxglove Fennec (born July 3, 1985)[1] is a furry artist and fursuiter who lives in Cary, North Carolina, U.S.A.[1] His fursona is a grey-haired albino fennec fox.

Foxglove owns three fursuits, all different versions of his fursona:

Foxglove has also recently started DJing conventions under the name F3NN. He has been DJing for 4 years now and has made appearances at conventions such as Anthrocon, MFM, FWA and Oklacon. He also holds a monthly "rave" in Raleigh NC that has a pretty good following. Videos are on his YouTube page.