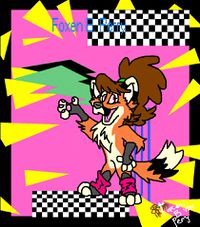 Foxen's fursona is an anthro vixen. Fond of the culture of the 1980s, her hair is a fluffy ponytail with curled bangs. She also wears pink leg warmers.

Foxen has white-toed paws and feet. She also has orange ears with black in the middle and white tips. Her eye color is purple with white markings around them, and she has a black marking on her muzzle. 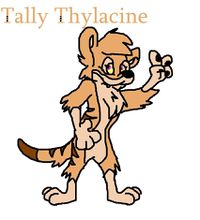 Foxen draws cartoons and makes comic strips for various people. Her art style is very toony. Foxen's artwork includes all kinds of shenanigans with Wolfy Luckless and the Chef Fox.

In 2010, Foxen acquired an interest in thylacines. She has created a character named Tally Thylacine, who is tomboyish and, like Foxen, loves to get into all kinds of shenanigans.