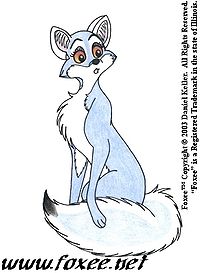 Foxee is an Arctic Blue Fox vixen cartoon character created by Daniel Keller, and is the flagship character of Daniel Keller's sole-proprietorship animation studio Project Destiny Studios. Foxee appears in two different primary designs, with one design depicting her as an anthropomorphic furry character and the other depicting her as a "talking animal" (quadruped) cartoon fox. The talking animal cartoon fox version of Foxee is the version that is familiar to the most people, and has been turned into a traditionally animated Microsoft Agent character and has appeared in two different comic strips. 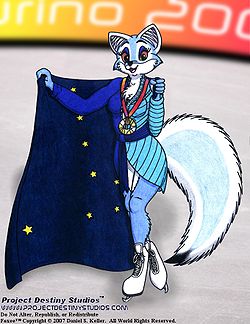 The furry version of Foxee™ dressed as a figure skater and holding up the flag of her native state of Alaska.

While the quadruped cartoon fox version of Foxee is better known to most people, Foxee was originally designed as an anthropomorphic furry character. She was originally conceived by Daniel Keller in September of 2002 after he ran across an advertisement for a king-size bedspread made entirely of stitched together arctic blue fox pelts on the Internet. Daniel Keller was greatly upset by what he saw on the website and felt that it was terrible that so many foxes had to give up their lives just so that some rich person could purchase a trendy bed covering. Because of that, he began to envision a graceful, soft-spoken, and delicate arctic blue fox vixen furry character that he could then portray as a damsel in distress in drawings that had themes against the fur industry. After an initial run of anti-fur industry editorial cartoons starring Foxee, none of which were ever published, Daniel Keller began to see Foxee in a different light. Daniel Keller redesigned Foxee's appearance and then began to draw Foxee in a series of sultry pin-up drawings that showed Foxee pining heavily for a long lost lover. While it is never shown in the drawings whatever happened to the object of her desires, it is assumed that he was taken away from her by furriers.

As a talking animal cartoon fox[edit]

Foxee lives in the shadow of the Transfiguration of Our Lord Russian Orthodox church in Ninilchik, Alaska. Despite the fact that she lives near a church, Foxee, since she is a fox, is pretty much completely oblivious to the concept of human religion. Instead she lives on the grounds of the church for the comfortable shelter that it provides and the beautiful backdrop that the church creates. While Foxee can be depicted in artwork and stories as existing during any time period, most of the artwork that she is in shows her as living during the first half of the 20th century and playing around with technological objects from that time period such as vacuum tube-based radios and biplane aircraft. Foxee has a fondness for eating chickens (which are not easy to come by in Alaska) and meat pies, loves red carnation flowers, and playing around with a nearby townsperson's vacuum tube radio, which she thinks is a magical glowing and talking wooden creature.

The Foxee Microsoft Agent character was originally created by Daniel Keller as a final programming project for his Advanced Algorithms and Data Structures class at Illinois State University in Normal, Illinois. Created over a period of three months, the original version of the Foxee Microsoft agent character supported only one animation and took over 300 work-hours and $500.00 in books, supplies, and animation equipment to produce. During that time Daniel Keller had to teach himself how to create hand-drawn animation from scratch out of animation school textbooks, how to compile Microsoft Agent character files, and how to program in the Microsoft VBScript programming language. He also had to create several papers and a presentation for the project. The workload for the project eventually became so overwhelming that Daniel Keller had to pull several all-night work sessions a week for more than a month to get the project finished on time, and came down with Pneumonia for several months afterwards as a result of his long-term sleep deprivation.

The current version of the Foxee Microsoft Agent character has 7 animations, can speak through your computer's speakers in 10 different languages, can communicate through text in 31 written languages, can accept simple voice commands through a microphone, and can interact with users through a computer keyboard and mouse. She can be accessed by any programming or web scripting language that can interface with ActiveX Controls, and interacts with and talks to users that visit her website at www.foxee.net.

Foxee made her first appearance in a comic strip as a guest star in a Tiggerman™ comic strip that was drawn by Daniel Keller and was first published in the Illinois State University Daily Vidette newspaper in February 2003. Her first appearance in comic strips happened not to be a very flattering one, for in the comic strip she was shown biting the head of and trying to eat a male domestic house cat that was foolish enough to ask a wild fox out on a date. On September 29, 2004, Foxee appeared in her own comic strip for the first time when she starred in a Tiggerman comic strip that was published in the Bloomington-Normal Indy newspaper. The comic strip was of an editorial nature and made a statement against the poor quality of the food served in Illinois State University's on-campus food courts. This solo appearance in an editorial cartoon lead to Foxee starring in her very own comic strip the next year.

In February of 2005 Foxee starred in her very own comic strip called Horsefeathers!™ that was published in the Bloomington-Normal Indy newspaper from beginning of February 2005 to the end of May 2005. Horsefeathers! was drawn by Daniel Keller, and was a left-leaning political comic strip in nature. The comic strip covered such issues as the environment, the sale and destruction of national parks in the United States of America, and censorship. In the comic strip Foxee was portrayed as a helpless and sympathetic hero who was forced out of her home against her will in Alaska's Arctic National Wildlife Refuge by big oil companies and was forced to find a new place to live. Foxee was eventually destined to become a squatter in the White House and become an aggravation to President George W. Bush and his dog Barney. After 5 comic strips, Horsefeathers! was put on hiatus by the Bloomington-Normal Indy newspaper for the summer, and was then chosen not to be continued by the newspaper the next autumn because Daniel Keller had graduated from Illinois State University by that time and was no longer located on campus. Work on Horsefeathers! has currently been suspended until a new newspaper can be found to host it.

In early 2005, Daniel Keller announced that he was going to create an animatronic version of Foxee. The animatronic robot would be constructed from wood, copper wire, fiberglass, epoxy resin, and faux fur, and would be able to talk, sing, and move various parts of her head, face, front paws, and tail. It was originally hoped that the animatronic Foxee would be completed and ready by the 2005 Midwest Furfest so that it could perform in that convention's variety show, but the project was unfortunately put way behind schedule because of the lack of funding for Daniel Keller to be able to purchase all of the parts, materials, electronics, and tools required to construct the robot. Funding is still currently an issue plaguing this project, and as a result no new predicted date of completion has yet been announced. The progress and building process of the Foxee animatronic robot project is currently being published on the Internet on the Foxee Animatronic Robot Project Blog.