The Fox and the Mirrior 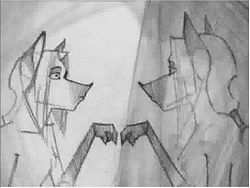 The vixen looking at her reflection, presumably for the first time.

The Fox and the Mirrior [sic] is an animation created by Razi at CalArts between 2004 and 2005, and which was first displayed publicly on 10 May 2005. Despite being displayed in Flash, the animation was done entirely by hand.

The heroine, a fox, is sleeping on a grassy hill, when she spots a butterfly. Seeing the butterfly makes her smile, so she follows it as it flies away. This leads to a cave. Seeing it enter the cave, she is discouraged by its darkness and turns away briefly. She then looks back at the cave, rears up on her hindlegs, walking bipedally, and hesitantly enters the dark cave.

The 'cave' is filled with mirrors and crystals. She is confused the first time she sees it, and investigates the mirror. Disappointed for some reason, she begins to turn away, when the butterfly once again flits before her. The butterfly is not reflected in the mirror.

After she notices that, she turns about, looking at all the other mirrors in the cave, obviously scared. After collapsing to the ground, she cries out, and clutches her chest in pain; when she opens her eyes again, they have become blank and hollow. Pupilless, she starts to growl and bark at the 'other vixen' in the mirror, until she sees the butterfly as a reflection in the mirror. Shaking her head, she closes her eyes, and when she has opened them again, she has regained her pupils; this seeming loss of control induced by the mirror angers her, and she smashes the mirror with both fists.

After she breaks the mirror, she is seen on the ground, curled up, in front of the shards. The butterfly flies through where the mirror was, and alights on the fox, which makes her smile as the scene fades out and the animation begins rolling the credits.