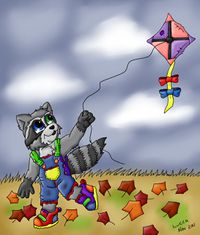 FoxWolfie Galen is a fursuiter, plushophile and Christian fur from Erie, Pennsylvania, USA.[1]

FoxWolfie hosts a comprehensive plush toy information/resource website, FoxWolfie Galen's Plushie Page. He was also active on the Usenet newsgroup's alt.sex.plushies during its most popular period, and owns several fursuits.

FoxWolfie Galen has been interviewed in mainstream media on several occasions, including by Salon in Cuddle Time in 2000.[citation needed] Probably his most controversial appearance was a March 2001 article, Pleasures of the Fur, for Vanity Fair.[citation needed]

In the June 2006 issue of the Pittsburgh City Paper, on about the article "Animal Passions" (written by Melissa Meinzer), Uncle Kage is quoted as referring to FoxWolfie Galen as:

in part due to this appearance.