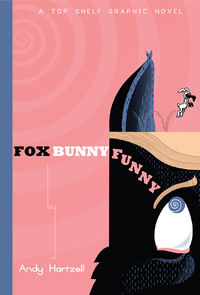 Fox Bunny Funny is a black-and-white wordless graphic novel by Andy Hartzell about a fox who wants to be a rabbit, and who is punished for his desires by an unsympathetic world that is fundamentally divided between carnivores and herbivores.

The book was originally self-published by Hartzell and distributed by Global Hobo. That first production was in three booklets housed in a two-color, silkscreened slipcover. A new edition is scheduled for release from Top Shelf Comics in June 2007.

Hartzell, who is gay, discussed the book at the 2007 Alternative Press Expo in San Francisco as part of a panel on "Queer Cartoonists". He said that the book has obvious parallels to the experiences of many homosexuals, but has also been described by others as a metaphor for other conflicts, such as the contemporary conflict in Darfur. At that event he said he was unaware of Kevin and Kell, another work that examines relations in a world divided between carnivores and herbivores.