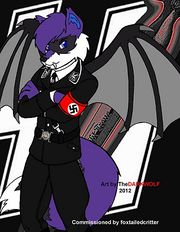 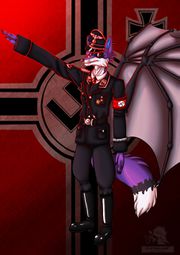 FoxTailedCritter is often seen on Furstralia's forums, and is an administrator of the Brisbane Cityfurs, a furry meet-up in Brisbane, Australia. He also creates fox tails for sale on FurBuy.

Foxtailedcritter is a member of the following groups:

His fursona is an anthropomorphic purple fox with wings. Often his fursona is depicted as a Nationalsozialistischen Gestapo-SS-Oberst-Gruppenführer (National Socialist SS General), in purple clothes.

FoxTailedCritter has distinct markings around the eyes like a raccoon. He has leathery wings and a set of large fangs.

FoxTailedCritter was permanently banned from the Australianfursuiters.com website for hacking into several members' accounts, including the site's administrator, on various occasions,[citation needed] and the Central Brisbane Furmeet for threatening other members.