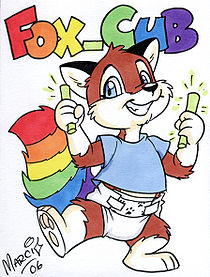 FoxCub, also known as Mike Fox, The Howling Otter, and Kisuna Mousehold on Second Life (born in Oklahoma in 1981), is a red fox babyfur living in Pittsburgh, Pennsylvania, USA. He's a self-employed woodworker/carpenter, skilled in a variety of areas including fine furniture design/construction, home repair/improvements, and artistic lathe turnings.

FoxCub relocated to the East Coast shortly after discovering furry fandom in 2000, and aside from a two-year move to Harrisonburg, VA, he has lived in Pittsburgh ever since.

Fox has attended a very large number of conventions, and has volunteered or held staff positions at most of them at one point or another.[citation needed] He also attends local meets in Pittsburgh on a regular basis, and hosts parties and meets of his own from time to time. He also works to organize large babyfur parties at major cons, such as the Cub Hub.[citation needed]

In addition to his fox character, FoxCub also has an otter fursona known as "The Howling Otter".