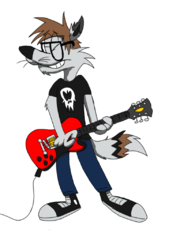 Jake's style employs a simplistic drawing style as his motto is "Cartoons are the art of simplification". Jake is the creator of comic strips Lookin' Bright (formerly known as A Furry Future) and Boredom Inc..

Starting in 2015, Jake has been co-developer and lead illustrator of the Tails from the Federation franchise, starting with Space Pirate Captain MacTaggart. Since 2018, he's a creative contributor for Critterton Concepts, the ColorWorld team that maintains The Dynamite Twins and Friends franchise. Jake is currently working on a graphic novel series, Midnight Fox.

Jake is solely a rhythm guitarist. His guitar style mostly consists of downstrokes and power chords as Jake also quotes that he much rather be a He was mainly influenced by punk rock guitarist Johnny Ramone (from the Ramones), Megadeth's Dave Mustaine, Anthrax's Scott Ian, and Doyle Wolfgang Von Frankenstein (from The Misfits). He also is a fan of country singer Johnny Cash and Nirvana's Kurt Cobain, both of whom have been a huge inspiration to him.