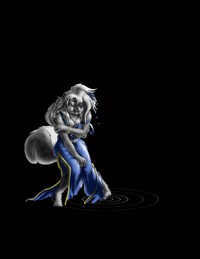 Fornax: You Don't Believe is the first full-length Fornax novella released by Fauxpaw Publications, in 2001. Written by series creator Matt J. McCullar, it continues the story of the musical ratel family known as Fornax.

The Fornax sisters meet up with a handsome ratel gentleman named D'Mago Leistung. The sisters are all smitten by the well-muscled D'Mago (except Pink, who stays true to long-time love Trevor "Spotty" Sarnoff), despite the fact that it's made clear he's married with a child on the way.

D'Mago's introduction into the tour's security staff causes a good bit of friction, mainly because of the attention he is given by the Fornax sisters. Eventually, D'Mago, a gentle giant of a ratel, finally decides to quit and go home before any further problems occur.

Before he does this, Blue spends a night in D'Mago's room. Blue swears that all they did was talk, but her sisters are sure she slept with him...a belief that is reinforced when Blue begins to have pregnancy-like symptoms.

The friction between Blue and her sisters over her condition becomes near unbearable, until Trevor finally steps in and takes Blue's side, choosing to believe her claim that she is not pregnant, and convincing her to see a doctor. Before this can happen, however, Blue collapses.

Blue is rushed to the hospital, and Fornax discovers that she had a massive tumor in her abdomen, which triggered the pregnancy-like symptoms. While Blue recovers from emergency surgery, the other Fornax sisters, Trevor, and their crew come to terms with what their refusal to believe Blue in the first place has cost all of them.

Artwork was provided for this edition by:

The front cover, pictured above, was done by Ignacio.