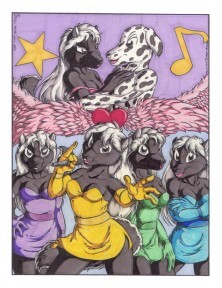 Fornax refers to the fictional five-piece ratel musical group who are the cornerstone of a number of short stories created by Matt J. McCullar. Fornax is also used to refer to the stories featuring the group.

The world in which Fornax lives is made up of various anthropomorphic animal races, each having many of the traits that their real-world counterparts have. Ratels, in general, are considered to be short-tempered and dangerous, a stereotype that Fornax does not live up to for the most part.

When Dalmatian music producer and engineer Trevor Sarnoff travelled to the backwater Saunim province for a business conference, he found more than he bargained for.

Visiting a shopping center shortly before the conference started, he heard a beautiful melody being played on a piano. Finding the music store where the sound was coming from, he discovered a beautiful lady ratel behind the keys. This was his first encounter with Pink Fornax. It was love at first sight.

Eventually, Trevor (who was almost immediately nicknamed "Spotty" by Pink) would meet her family - she was one of five quintuplets, all of whom were named for colours. His first encounter with Yellow Fornax almost ended in tragedy when he surprised her, thinking she was Pink. His initial interactions with the other Fornax sisters - Green, Blue, and Violet - were much less stressful, despite having to give Violet the Heimlich maneuver when she choked during dinner.

Trevor found out that the sisters were excellent singers (save for Pink, who had been rendered mute due to a childhood accident) and musicians. The sisters, at first, humoured his suggestions that they perform at the closing of the conference; it took pointing out his name as producer of a number of the recordings they had in their home to get them to take the suggestion seriously.

In that first performance, Fornax wowed the audience to a degree Trevor had never seen before, starting them on a journey that would make them their world's most beloved band. Later stories focus on these later years, and the band's relationships with their fans, their crew, and each other, through good times and bad.

McCullar's original Fornax stories first appeared in APA Castlehome, and were later collected and republished as Fornax Remix. A revised version - Fornax Remix 1.1 - was released by Fauxpaw Publications in 2002.

Fauxpaw has since released the Fornax novellas Fornax: You Don't Believe, written by McCullar, and Outtakes From A Recording Studio, written by Gary Akins, Jr.. Another novella, Touch The Sound...Feel The Music by Philip Eggerding, takes place in the "Fornax Universe", but is not specifically focused on Fornax themselves.

Stand-alone short stories have also been published, mostly in Fur Visions, over the years. One story, "I Remember, I Remember", was published in the 1999 Mephit Furmeet con book. Another short story, "Fornax: Hauling Ass," appeared in the 2006 MFM con book, and is also available on Philip Eggerding's Fornax fan site.