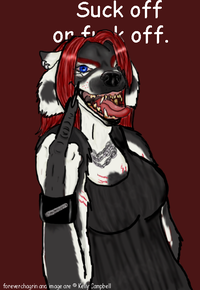 Kelly has been in the furry community since 1999, and made her first public appearance as an artist on deviantART in October of 2002. Her artistic style consists of mostly realism in human anatomy, with realistic animal features (such as the head and the tail) combined with comic-styled facial expressions.

Kelly's fursona is a black, white, and red female wolf known as Chagrin. Her physical stature and physique are exactly the same as her real-life creator.