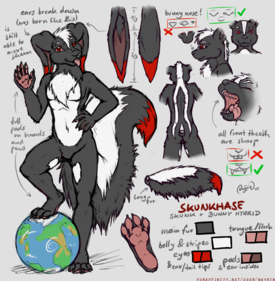 The artist goes under two different names: ForcesWerwolf for explicit themes, and Nayrin for everything else like clean, adult or paw related furry art.

Example reference for a character of the Drenath species. 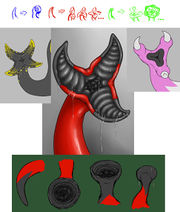 The structure of a Drenath clan.

A Drenath (plural Drenati) is a fictional closed species. The species is said to be inspired from animals and creatures such rabbits, snakes and [[

A Drenath size is an average of 9' 10". Their skin features no scales and reflects light like a shiny glossy surface. Their flesh is always black or a very dark shade of their main skin color almost appearing black. Also their eyes are always in a shade of green. They are known to live up to 150-200 years.

If a Drenath mates with any other species the offspring will just be another Drenath regardless of the parents gender. Their DNA dominates over every other species trait except the skin colors of their body. Only a red skin Drenath is a pureblood Drenath. Any other color besides red-black is caused by other species DNA.

Each of them got different and unique markings. The markings are usually most present at the back of their body.

A Drenath is usually faster and stronger than they look like, but are able to control their strengh. The muscles do not bulge out as much as it would for a human, but feature the same growing strengh after longer periods of training. This often leads opponents to underdestimate them a lot.

For every male Drenath 6 females are born. This is by random and can't be influenced.

Like a snake they prefer to swallow their prey whole. The jaws are able to unhing and allow bigger prey to pass through the throat. The ribs are able to spread appart only connected with strechy ligaments and joints to allow bigger sizes of prey.

The hands of a Drenath are humanoid, though a bit thicker and shorter fingers. They got a thumb and 3 fingers. The paws feature 3 toes. Their big claws can't be retracted. A drenath's leg appears to be plantigrade but walks on them in a digigrade style.

At the back of their head and neck are so called neck tails. Those tails are able to move, do not feature any bone but muscle and fat.

The male genitals of a Drenath are flesh colored. They feature a human and dragon fused design and thicker knot like middle part. Soft barbes may develop. In rare cases the tip of the penis can spread open like a split tail maw but can't actually be used for eating things.

A Drenath is able to hold their natural needs back until they are able to furfill them or are forced to. However if they get teased and/or touched at the right moments or sensible areas they might fall into a trance like state of instinctive sexual or predatory behaviour and might forget about holding themselfs back and could hurt their friends in the process.

A Drenath tail features a opening at the tip of the tail. The opening leads to a second esophagus similar tube which on its own leads to the stomach. There are different variations of the tail opening or tail maw: round, 3-split, 4-split, soft barbed, with or without teeth and others. No tongues or tentacles.

The whole tail and the tail tube is extreme strechy, made out of strong cross webbed muscles and fat. The tail is able to engulf big, unwilling and even still alive prey. The wet ring muscles create a vacuum like sucking effect; It is said once a part of your body is sucked inside the tail you will not be able to escape it unless the Drenath allowes you.

Inside the tail prey can be kept alive. The lung is connected to multiple small holes in the tail tube walls and is able to optional fill it with breathable air. This can be used - or not - depending on what is needed. And on the other rside the tail tube can also be used as a secondary stomach as well as it features digestive glands at the base. This enables the tail tube to be used as a safe hiding spot for offspring in possible danger or keep prey and/or friends alive and safe for a long time. The walls are also able to optional remove the usual present liquids and fluids inside the tube to remove the danger of air not reaching where it is needed to be.

Drenati are almost always hungry. Their body uses and needs a lot. They literal have to eat a lot in order to stay nourished and comfortable. Hunger is felt much more intense than other species would do. It is in general no good idea to get near of a hungry Drenath unable to find food when they are in need of it. If their level of hunger grows they might even lose sense for friendship towards non Drenath species and might even prey on friends they care about.

The acids of a Drenath are strong and able to digest bones, which enables them to take as much of their prey as possible.

Self made markings or piercings are seen as a degeneration of the Drenath race by other Drenath.

There are several clans. They prefer forest environments. Clans are usually based on the 1 to 6 relationship rule based of the birth rate of male and female Drenati. A clan division is usually made out of one alpha female, six beta males and further 36 beta females adding up to 43 Drenati. If there are more than 43 they are still accepted but not as high in rank as the others.

Out of all Drenath clans the most powerful and oldest one is called the Origin Clan or The Main. Traps, warning signs and even corpses will usually be put up to prevent people from entering their teritory. Only trusted members are taught how to get past of the traps. The Origin Clan is made of strictly only pureblood Drenati and is even racist towards other Drenath without the red color. They usually refrain from hurting them, but it happens. Should someone other than a Drenath enter their teritory, they usually end up killed and/or eaten by them. A mother of a not red skinned Drenath will be threated as a traitor and is forced to leave.

There are several other clans besides the Origin Clan and most of them act similar with the only difference that they are not as strict or racist as the Origin Clan. However a negative bias towards other species is a general thing, and sometimes some individual characters leave their clans in order to mix themselfs under other species as their own to befriend and stay with them because they don't agree with racist behaviour of their clans and parents.