Fohrrs represented in a drawing created by himself. 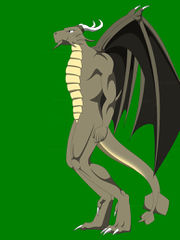 The original form of Fohrrs

Fohrrs, also known as Shintei, is an Italian furry fan.

His namesake fursona represents an anthro dragon. Fohrrs always loved drawing, everything, paying particular attention to the human being and also always loved videogaming. His drawings currently have a nipponese style by taking inspiration from Gōshō Aoyama, that is slowly modifing into a more personal style cause of furry drawings, but always japanese. Since he was born Fohrrs has always felt a particular fondness for anthro animals and dragons and he always loved these humanoid creatures. Just in 2010 about, when he was 14, he knew the fandom, but for some mysterious reason he thought that define himself a furry was offensive against them. Later, towards 2013, he has chosen to define himself a furry and he created and drew by himself his fursona and on 3rd may 2014 he definitively entered the fandom knowing new people and taking part at furmeets.

His fursona represents an anthro jet dragon with green skin: originally he borns digitigrade and with a different general appearance from that one he currently has, i.e. muscular, with six abdominal scales and he is plantigrade. Fohrrs borns as a neutral gender dragon and thanks to a project named the Union he became a male; he never wear clothes except for some roleplays in which he impersonates character created by the same furry. He is tall 2.30 m and the weight is 170 Kg, he has a sharp chin that allows him to be aerodynamic while flying and a pair of demoniac wings, winged dragon-like; at the end of his tail he has some wings reminiscent of F-35 jet's wings. the face is rectangle-like shaped and the head has two horns on it plus six horns behind the jaws, three each one. He has a scar on his left cheek that goes below the mandible and long, straight brown hair tied with an elastic band to form a tail.