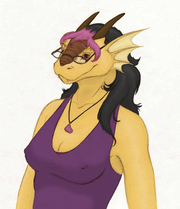 Flynn as drawn by Electric Talia and colored by Flynn

Outside of furry, Flynn is a long-time player and content contributor of the Dungeons and Dragons roleplaying game, as well as an RPG designer herself. She also worked for Nintendo of America, and is an activist for intersex awareness. Flynn is mated to Jalen.

Flynn has attended many conventions, the Rocky Mountain FurCon in particular, which she goes to nearly every year.[citation needed] She knows hundreds of members of the furry community, and supports obscure/under-appreciated yet talented furry artists.[clarify]

Her experiences as an artist mostly involve designing avatars and accessories for Second Life. She also draws on occasion.

Her fursona is a Norse lindwurm, a humanoid saurian mammal with the head and tail of a serpent, as well as goat horns and large, distinctive earfrills. Although not a dragoness, she is often mistaken for one. She is also a hermaphrodite.