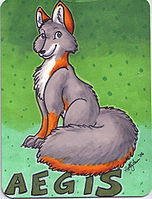 Aegis, by the artist HollyAnn.

Aegis (also known as Flying Fox or FlyingFox17) is a fox furry who lives in Wilmington, Delaware, U.S.A. He regularly attends many conventions, as well as local furmeets, including The Furst State's meets in Delaware and LupineFox's meets in Hellertown, Pennsylvania.

He is the younger brother of Chewie.

Aegis first decided to make his fursona a grey fox after interacting with a grey fox fursuiter at his first Anthrocon, in 2004. Aegis is an avid collector of all things fox-related, including art, plush toys, and more. Grey foxes are his favorite species.

He has attended 14 conventions thus far, and counts FA: United and Further Confusion among his favorites.