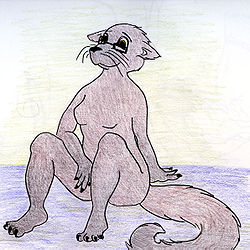 A depiction of her fursona, by Flye.

Flye (born September 4, 1988) is a binturong from Perth, Western Australia. She was the chairman of FurWAG.

Flye has been a part of the Perth Furs community since early 2005. She has had an online presence longer than her real life one, like most furries.

Having a crafty side, Flye enjoys drawing, painting, and sculpture, as well as textile work. She has made several sets of fursuit gear, including tails and paws. She has explored various media including traditional and digital painting, crochet and amigurumi.

Flye is studying at the University of Western Australia, where she is majoring in English and Cultural Studies. She has a great interest in sociology and has interviewed other furries as part of university research projects.

Flye was on the organising committee of FurWAG, acting as Art Director in 2013 and replacing Darky as Chairman in 2014.[1]