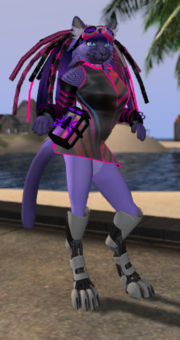 Full body picture of Flutters Jay in Quarabia, home location of The Ark.

Flutters in Second Life in her white theme
Flutters Jay, also known as Flutters Scimi or just Flutters (born on December 21 1994) is a European furry. She was born in Belgium and lives there up to current date. Her fursona is a purple caracat, a cross between a caracal and an Abyssinian housecat, and is usually depicted with prosthetic hind legs and a few facial piercings.

Flutters had been involved in the furry fandom since early 2001, at the age of 6. Around this point, it was merely looking up anthropomorphic animals and imagining herself as such, all because of Warner Bros' Looney Tunes series. Bugs Bunny is still one of her idols up to this point in time.

On Second Life, she appears as Flutters Scimi, partner of Desmond Scimi, a red and dark purple dragoness. Her appearance on there is a purple house cat, whose base had been designed by Luskwood Creatures, with two prosthetic hind legs, either clinically white or carbon fiber black; piercings on the left eyebrow, the nose bridge and a septum ring; and her deep purple hair containing black and pink "cyberlox". She has made a few versions of this character, each with a similar backstory, but branching off at crucial points. So is her usual character dressed in eccentric party wear, consisting of mainly synthetic dresses and miniskirts, and lives in the present. This version is inspired by the cybergoth subculture, while another version has done her hair in a "dreadhawk" style mohawk, wears short denim or leather shorts, accompanied by a leather jacket and carries around a grenade belt and a backsword. The latter is heavily inspired by the cyberpunk subculture.