flutterby (Jürgen Wallner) is an ASCII artist and a fursuiter living in Austria. He usually prefers to go with the name };{, but for technical reasons "flutterby" became his IRC nickname and accepted pronunciation of "};{".

Flutterby was born 1972 in Krems, Austria, studied technical physics in Vienna and currently works as a software engineer in the speech recognition business. 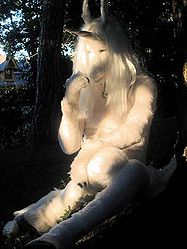 He has built a suit of his own character which made its debut at MMC 7.

Flutterby also built a black unicorn suit inspired by the famous song of Heather Alexander. At Eurofurence 11 in Nuremberg he presented this suit and got on stage when Heather played this song. };{ attends conventions like Eurofurence, MMC, H-Con or Zillercon and has been responsible for the fursuit gameshow on Eurofurence 12.

He used to publish the Unicorn & Butterfly webcomic which is also the origin of his true nickname };{ (depicting a butterfly) - but discontinued it because of health problems.

Flutterby also did co-moderation and sketches in Taibu's Roaring Radio and was quizmaster at H-Con 1, 2 and MMC 9. In Austria he hosted several furmeets at his place near Vienna.