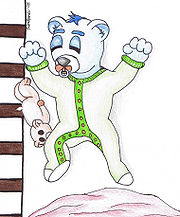 Fluffy's main fursona is a blue polar bear. He has a secondary fursona named Mudball, who is a cubfur red fox with dark red fur and light brown paws and belly fur.

Fluffy has been out and about in the furry fandom since early 2008, but has been a fan of anthro and babyfur art since 2001.

Before he joined the fandom, Fluffy spent a number of years living under religious vows, first as a Franciscan friar and then as a non-cloistered Benedictine monk. Fluffy graduated with a degree in Veterinary technology in 2006 and (as of November, 2008) is a head cook at a short-term rehab facility.

Fluffy is an anthro artist with a specialty in cubfur art. He also dabbles in arts and crafts including fursuit construction and anthro fleece hats. 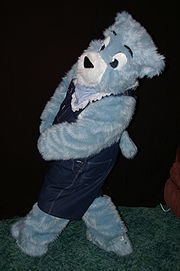 Fluffy Snowpaws' fursuit is a toony light blue bear with a white muzzle and belly, and blue eyes. He is a cub and is short and pudgy. Fluffy made his own suit with the help of Yama, Damon Husky and Atari Otter.