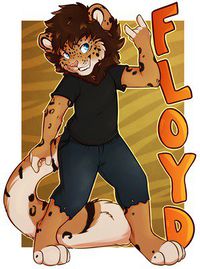 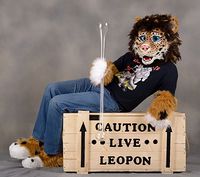 Floyd posing on his hand built fursuit crate, with his yard glass

Floyd is a fursuiter from Taylor, Michigan, USA.[citation needed]

Floyd's fursuit is a fullsuit, built by Snap E. Tiger. While most people carry their fursuits around in plastic totes, Floyd got creative and built a one of a kind fursuit tote, designed to look like a wooden zoo crate. The interior of the crate also contains a wine rack which holds up to 5 bottles of rum, and a mount to safely store his yard glass.

Floyd has attended several conventions including: