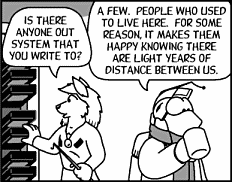 Florence (on left) and Sam.

Florence Ambrose is one of the main characters featured in Mark Stanley's webcomic, Freefall, starring alongside Sam Starfall and Helix. Her species is "Bowman's Wolf". She is currently contracted by Sam to work as a technical engineer onboard his starship, the Savage Chicken. She often acts as a foil to the other two main characters, as their personalities contrast in every possible way, Florence being honest, hardworking, and logical, with Sam and Helix being the exact opposite.

Florence has never actually met any other of her own kind, but as she has been around humans all her life, she regards this plight with curiosity rather than regret.

As a character, Florence is highly intelligent, honest, and sees no need to prevaricate when speaking her mind. Unfortunately for her (but fortunately for Sam), her innocence and instinct, combined with a wide range of plot devices, has apparently hidden from her the fact that her captain is a freelance con-man.

Emotionally, Florence is rather ambiguous - she is usually very cheery, but she has expressed fear, frustration, and resignation at times, and has developed something of a love interest for Winston S. Thurmad, the human veterinarian/parasitologist who helped nurse her back to health in the "hurricane" story arc (year 2000).

As an outgrowth of her wolf instincts, Florence is quick to assume a niche where she is most useful, and dutifully obeys the person she considers the "pack leader." She has been known to capture and kill her own food and howl at the moon. She treats all intelligent beings with respect, including the many robots of the starport, who universally greet her with a cry of "DOGGY!".

Florence is also a regular character in Cross Time Cafe.