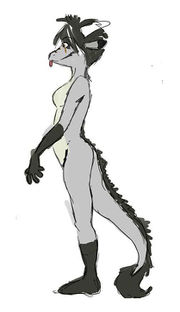 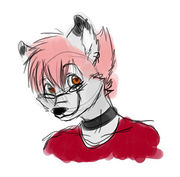 Floe, also known as Floebean and Kris,[1] is a furry artist who lives in Hartford, Connecticut, USA,[2] previously in Long Island, New York. Floe's real name is Kris, and they use they/them or he/him pronouns.

Floe was the Guest of Honor at Mephit Fur Meet 2014,[3] and is a member of the Long Island Furs. They have been involved in the furry fandom since the mid 2000's, when they frequented anthrochat.net on IRC, mostly in #nonfurs.

Floe's fursona concept started out as a story of a dragon who was cursed into the body of a human for a hundred years. As Floe (the person behind the keyboard) furthered his journeys on the Internet, he was exposed to furry fandom and this character became his fursona.

Floe is a light grey anthropomorphic dragon. His arms and legs from the knee and elbow down are black, as are the tips of His ears. He has two small white horns, amber colored eyes, and three scars on his face.