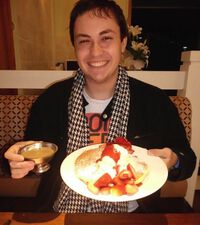 Flicker, formerly known as Orokana (born 1991 in Canberra, Australia), is a furry fan and fursuiter who has lived in Brisbane since 2005. 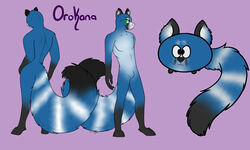 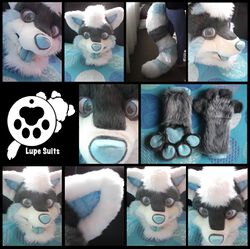 Fursuit created in 2013 by LazyLupe.

Flicker works full time in the transport industry and has had previous experience in the tourism industry, in particular, theme parks. He has also done volunteer work with the Queensland division of RSPCA Australia.

Flicker likes playing Dance Dance Revolution, or just enjoying a day at the Botanic Gardens. He can also be found at the beach, or at one of the many theme parks on the Gold Coast.

When night falls on a Friday or Saturday night, he can often be found at one of Brisbane's restaurants with friends or sleeping.

Flicker has been an active member of the Brisfurs since 2007. He attends the South Bank Fur Meet on Tuesdays regularly along with the occasional meet on the Gold Coast.

In late 2013, Flicker purchased a fursuit made by LazyLupe which made its debut at CBFM and had its first major debut at the 2014 Sydney Gay and Lesbian Mardi Gras. As of July 2016, his original suit was donated to a friend as he upgraded his suit to a new full-suit by LazyLupe.

In 2013, Flicker was part of the RivFur Volunteer team, working con-operations, the headless lounge and various odd jobs until 2016. Since 2017 he has taken on the role in a more official manner, joining the staff as external event's coordinator as FurDU. He was also one of the main co-ordinators for South Bank Fur Meet (SBFM) from 2015 to 2018. He has since stepped down from running the meets as of July 2018

Flickers's fursona is a blue and white anthropomorphic Red Panda.