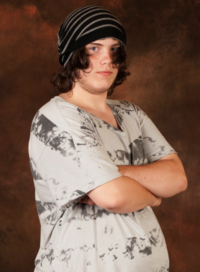 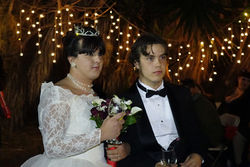 Flash and his wife Jane at the Prancing Skiltaire in 2013.

Flash the Fox (real name Andre Steven Abreo born August 7, 1993) is an American musician, singer and actor in Torrance, California, most commonly known for his work as a cast member on The Raccoon's Den.

Flash was born in Jamestown, California, he grew up in Bellflower for the majority of his life until he graduated from high school. He later moved to Torrance, where he would continue to live as of 2015. On December 14th in 2013, Andre married Jane Maria Nicholson at the The Prancing Skiltaire[1].

Flash has been a furry fan since 2009, joining the fandom upon first attending The Prancing Skiltaire in 2012, where he made his debut appearance as a new cast member on "The Raccoon's Den" during its third season[2]. Flash had since then become a regular attendant of the furmeet and has also attended Califur 8, along with the fall FurBQ in 2012.

During his time on the series, Andre's wedding with Jane Maria Nicholson (now separated)[citation needed] at the Prancing Skiltaire was featured on an episode in season five. Upon the sixth season finale, Flash departed from the web show to focus on his record deal and job[3]. 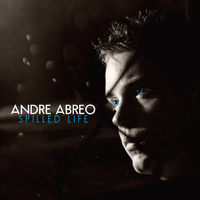 Artwork for the "Spilled Life" EP.

Flash is a pop singer who performs under his real name, an announcement of his music career was made on an episode of "The Raccoon's Den"[4], where his debut single "Spilled Life" was later advertised on their website. The song was released on April 2nd, 2015.

After announcing that he was working on an EP for the single, a remix contest was launched on May 3rd to feature three additional artists on the EP as well as a brand new track[5]. The contest was later reposted with sponsorship by the Furry Musicians group on FurAffinity on August 17th after the initial post only gained minimal attention[6][7], officially closing on October 1st.

Flash would later post a vlog announcing the winners of the contest (Caliber, Zapper the 3L3CTR1FY1NG and ROBOコヨーテ) and the official release date of the EP[8]. The EP for "Spilled Life" was later released on November 8th, 2015[9].