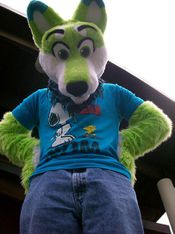 He is an avid fursuiter and owns a partial fursuit of his fursona, which was created by Audri. He is mated to Uruhei. Flash is an active member of The Furst State and attends most Delaware Furbowls as well as other local meets, including Tony Ringtail's Fur-b-que. He has also attended FA: United 3 FA: United 4 Anthrocon 2011 and Furry Weekend Atlanta 2012. Outside of the fandom, Flash works for Barnes and Noble.