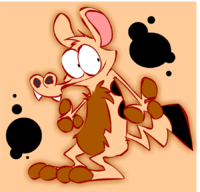 Flacko's fursona is male, and is a mix of weasel and meerkat with a funny cow-like nose and flash-shaped tail. Flacko got the inspiration for her avatar from the character Scrat from the movie Ice Age.

Flacko obtained her drawing skills from reading comics and watching cartoons. She started drawing when she was four. Flacko has worked for the children-oriented website Lastekas.ee, and animated the Flash-based cartoon Jänku-Juss.

Flacko has also drawn animal characters for many of the members of the Estonian computer-related bulletin board HinnaVaatlus.

Flacko built her own fursuit, depicting her fursona, in 2012.[2]