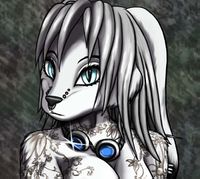 Fjara Reifsnider (born 1995), formerly known as Neo, is a photographer living in South Wales, United Kingdom. Her fursona is a rabbit/fox hybrid.[1]

Fjara discovered the furry fandom through Second Life in February 2008. During that summer, she developed and kept her "bunnyfox" hybrid fursona, which underwent minor refinements in concept until 2011. She began attending Cardiff furmeets in February 2012, and since May of that year she has been photographing the local furries.

As Neo, in July 2012,[1] she started a new chapter in her furry life by taking up her new name - Fjara - and transferring this to her online identities. The name Fjara translates to 'beach' in Icelandic and was inspired by a song of the same title by the band Sólstafir.

Following the end of a college course in June 2013, Fjara exhibited a series of photographs involving the Cardiff furries and their environment. Her work endeavoured to educate outsiders by showing the furry fandom in a positive light.

In autumn 2013, Fjara took up an organiser type position for WelshFurs and in the CardiffFurs Committee, and in May 2014, she was elected as the UKFur Forums photography section moderator.